…just about. We have the remainder of today, and then we will be up mortifyingly early tomorrow morning and off to the airport to catch our flight to Cuenca.

Fittingly, we visited the equator today. Yes….the actual mid-point between the northern and southern hemispheres; and yes, we got the proverbial photo of one foot on each side. Such tourists. We hired a taxi driver from yesterday, Alfonso, who took us there and kept Myles chatting the whole time…giving us some of the inside scoop about Quito. 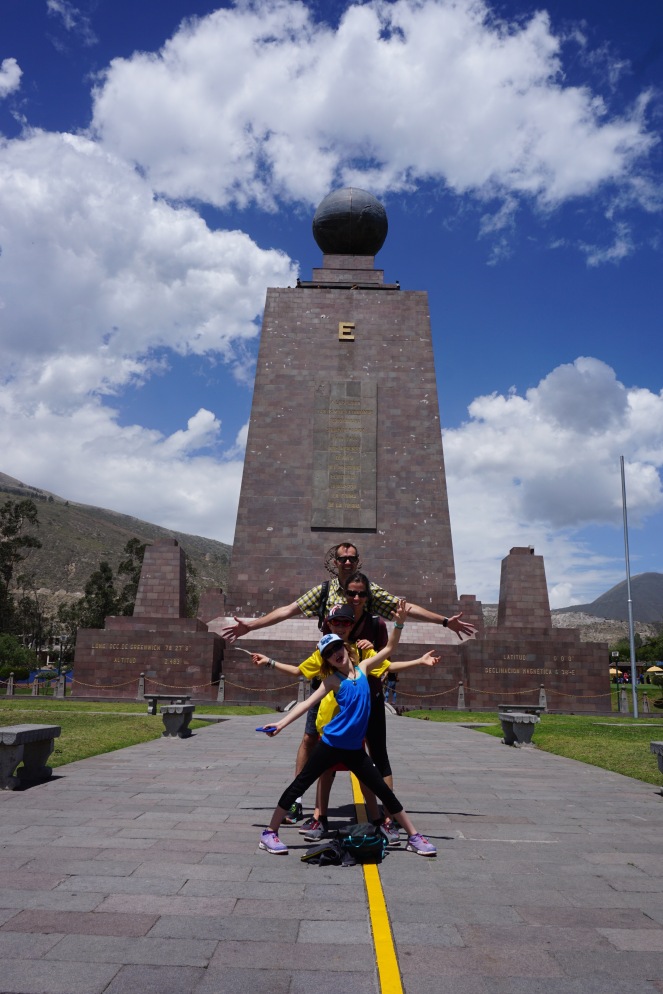 As much as I’d say we are undeniably enjoying our time here in Quito, I am really looking forward to Cuenca where we can settle in and carve out a mini-life for two months. I am finding this bigger city tough to get around without walking 45 minutes or hiring a taxi, thus making it challenging to have the sense that you are part of a community. We have been making the most of the mornings and early afternoons before the clouds open up and release the assault of rain, then we return to our apartment to do some school-work. I’ve included a photo below in this blog entry of what a typical afternoon of studies looks like…you may even be able to see the downpour in the background. Jasper is doing a math program online, and Macy is researching some things she wants to add to her blog. Myles is likely researching and planning a portion of our trip…he’s so good at that 😉 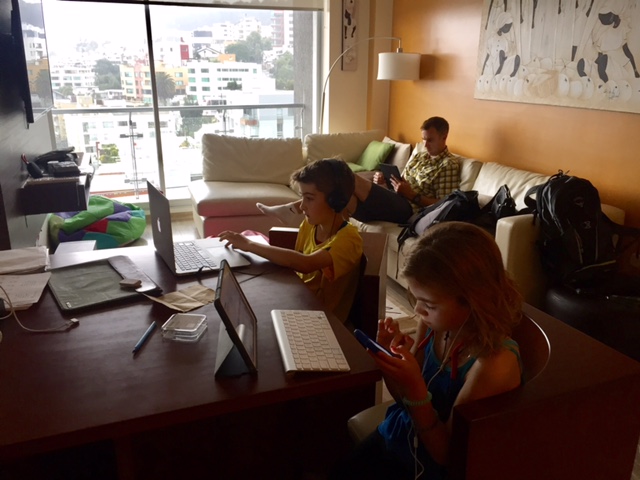 One other piece I am looking forward to in Cuenca when we settle in for a chunk of time, is being able to make more of our own food. We have attempted to “cook” some things here at our apartment, but really “cook” means prepare or throw some mostly-made things together. I’d guess we visited Megamaxi, the wonderful South American cousin of Superstore, at least 7 times in total. Love that place. We have also eaten out quite a bit, but the deep fried goodness that is everywhere is starting to get to me. I’ve also included a picture of my most recent fast-food endeavor from “American Deli”, which was Ranchero Pescado. For those of you who know me, you will hear my deep dismay as I tasted the lentils/beans portion of the food and realized my hopes for deliciousness had been deceived by the lentils being utterly saturated with cilantro. Ew.

These other two pictures I’ve included here are of the church that my kids talked about in their blogs – the Basilica Del Voto. Beautiful. I just like the pictures!

Off to Cuenca tomorrow.

Thanks Quito for introducing our family to South America and initiating our Shaffer Nash Big Adventure in a most wonderful way.

View all posts by Myles Nash